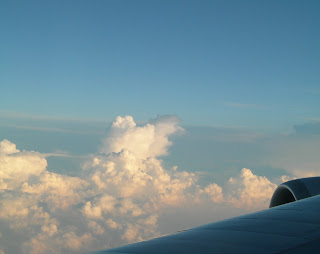 It was raining incessantly that day as I looked out the window, into the emptying streets. The last of the monsoon rains would soon subside into a mild drizzle, but then, I wouldn’t be around to see that work. It unnerved me to think that I would soon be above the very clouds that sprinkled all this magic onto the sleeping city at midnight---I would soon be flying away from home in an air-compressed silent cocoon full of plastic smiles and pretty window seats. And yet, the impending experience looked so improbably distant, like a dream that awaited me in slumber. Reality slipped away as I observed the glimmering city lights and shops closing down for the night. The fact that vacations were over and that it was time to head back to waiting parents was difficult to digest as I inched farther and farther away from my favorite city. My heart leapt back home, desperate to cling onto the last of it, and my mind sought the familiar comfort it exuded…the recent memories reappeared, as I turned back to the streets, unseeing. Friends and family gathering around a taxi on a deserted street, their sad smiles turning a little happier with an inappropriately timed joke. Last good-bye’s, handshakes and “good-luck’s.....bear hugs, and a thousand silent wishes....
“Lakshmi,” they had said optimistically, “If you are careless and happen to lose your travel documents somewhere along the way, rush back home. Just know that we will be still here, waiting…”
“Let’s just hope I turn careless, then” I had waved to them with my last smile as the driver turned on the ignition. And they had waved back until I had turned the last bumpy bend.....
The city looked oddly fresh with its reflective lights and the street lamps continued to glow eerily bright as the rains lashed all around. That day, a favorite aunt had sat next to me, her silent concern extremely apparent in the awakening night.
“How do you feel?” she had asked her voice low.

I had not answered.

That empty silence did not mean I wasn’t feeling anything. It was just that I couldn’t bring myself to assign a proper name to what I was feeling. I tried to place my feelings, but they were such an incredible tangle that it was impossible to assign a name that would do complete justice to the emotions. Should I have said that I was overwhelmed by sadness? Should I have said I was panicking? Should I have said that I was homesick already? Tears gathered slowly in my eyes, and I quickly opened the window. The rain lashed on my face, and the winds tried to force the tears away. And suddenly, a voice echoed in my mind, “Lakshmi, you are no more a kid…you are soon to be nineteen…you are a woman, try to act like one.”
My immaturity wished for miracles, but I tried to ignore it to be the mature woman I was supposed to be. But it was hard to pretend, especially on the day you would leave them all behind. The Mobile ringed sharply, even as the car approached the airport, and warm voices flooded me with their good wishes. I thanked the invisible hands held mine when I needed them the most.

Aunt’s question remained unanswered until I boarded the flight. The rain drops gathered on my window, the world looking somber through their convexity. The plane took off into the welcoming night, and the glistening raindrops gently slid off the glass window. The city gleamed softly beneath, winking and beautiful. I found presents stashed in my cabin baggage, and I looked at them like a child would at Christmas. As I tenderly began to unwrap them one by one, I stared back into the night and answered my aunt.

"Grateful,” I said, as monsoon clouds snugly enveloped Bangalore beneath me.

Join me in storytelling!

I also blog at: