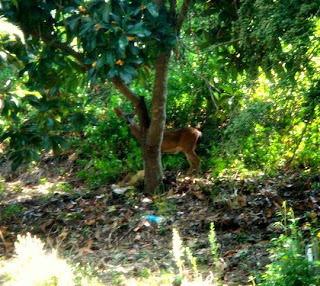 “You can spread your soul over a paddy field, you can whisper to a mango tree, you can feel the earth beneath your toes and know that this is the place, the place where it begins and ends. But what can you tell to a pile of bricks?”
(Nazneen, from Monica Ali's 'Brick Lane')

When I look at the world from high vantage points, my perspective claws out the minute details of the sprawling scenery, pecking at the edges of distant shapes, discerning objects and bringing to focus the complex intricacies that lie below. Perched alone atop the terraces of biology lab in the enervating heat, I didn’t see much that overwhelmed me. An ordinary day decorated by bland taste, a few withering plants here and there and a cloudless sky that held a ferocious sun.

Beneath, a technology infested world talked back. I watched it move minutely, but with such great hurry and heavy deliberation. Everything so immediate, purposeful and directional. Every motion planned, every move, systematic. The busses were prompt. The students wasted no time. Their sharp urgency became my amusement. As I watched technology rumble and tumble all around me, spilling and whizzing away with dignified solemnity, I felt suffocation. Where were they all headed to? Why the need for hurry? Why is the world that rapid? Why can’t we relax and take time off to breathe? Sitting there, I perceived the environment as an organized chaos, a mad race of people, machines, purposes, secret intentions and ambitious desires. But surveying the world around me certainly didn’t make the perspective clear, no matter how hard it tried to identify. Maybe intentions and desires aren’t as easy to separate as physical objects. I felt disgruntled.

I was hardly keeping up with how the world was improving. The fluid passage of time, the smart quickness that governed life, the fact that I was getting older by the day…they were hard to deal with, a source of bother, of perpetual unhappiness. How much harder should I run to keep up? The world was moving! Clearly, my lazy bones had some work to do, and maybe I would finally discover order and comfort in this chaos that surrounded me. A disturbance was building within me, expanding to a din. Watching the chaos, I felt abandoned. I felt horrible, like humanity had overlooked my presence, like this space had left me behind..... 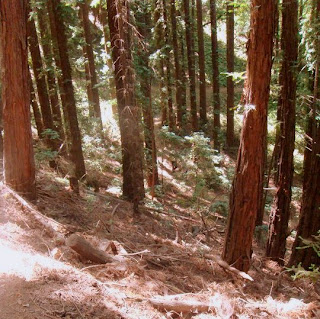 The hiking trail smelled of soil. Well worn feet moved on them, trudging. As the usual summer day’s heat pressed down, I wiped my brows but continued. Silver oaks and sequoias showed mercy on the battered soul, sheltering as much as they could. Of course, the classmates were far ahead on the educational tour, and my lack of energy was making me lag behind. The fatigue was building with inclination. I was trailing. I was still not moving fast enough for the world. I was still left behind. I was still unhappy.

We gently sloped into the woodlands, where the redwoods grew to heights that thrilled. The familiar moisture that lived under them healed my prickly skin. I looked to the trees, and they stole me. “They last so long that you could almost believe it could be forever…” the teacher was saying. I stared from my little nook, the one which wasn’t a vantage point. On the loose soil in the untamed wild, I saw a perfectly still world. Silence, apart from a few distant bird calls. Unchanging trees, that would always stay, fixed and firmly rooted. Secure and timeless. Everything that I ever wanted. This was my inner peace, staring right back at me. Everything that my elevated view that stared upon all of humanity hadn’t shown me. 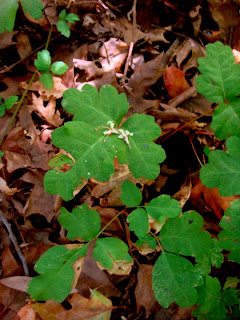 We headed back now, winding our way through narrow trails. The undergrowth was inviting and fresh, and so full of silent plant life. Even in the silence, there was life. Vitality. An exploding variety of thriving complexity. 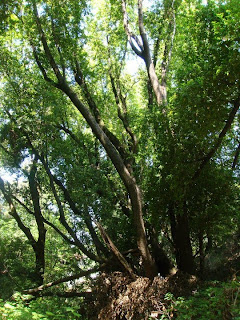 Blackberry bushes, trilobed leaves. A mischievous and venomous poison ivy, concealed cunningly in the green. Ferns, that spread their wings to sunlight’s whimsical wishes, thorns that alarmed with their loud presence, webs woven of bewildering sincerity collecting water, bay oaks spreading like nothing could stop them, a sapling emerging tenderly with such dedicated determination, deer that lingered behind trees with watchful eyes, the deciduous leaves that lay strewn all around that were fragrant even in death….my happiness was in this nameless wonder, in being granted enough time to appreciate creation. And today, my happiness had witnessed rebirth. I was, predictably, the last to emerge out of the trail. But here in the wild, it finally felt good, to be left behind..... 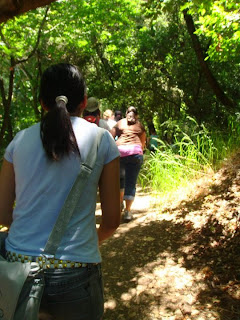 (* Special thanks to Ronia for the pictures, without which this post would have been incomplete. Thanks a ton for deciding to share!)
Posted by Lakshmi Bharadwaj at 2:01 AM 5 comments

Join me in storytelling!

I also blog at: